A pterygium is a wedge-shaped fibrovascular growth of the conjunctiva, also known as the surface tissue of the white of the eye that extends onto the cornea. Pterygia are benign lesions that can be found on either side of the cornea and may be caused by prolonged exposure to ultraviolet light. Pterygium surgery removes pterygia from the eye in more serious cases.

When is Pterygium surgery required?

Though small pterygia can be treated with steroid eye drops when they flare up, more serious lesions on the cornea may need to be surgically removed.

Removal will likely be advised if the pterygium is growing far enough onto the cornea to threaten your line of vision. Pterygia may also be removed if they cause a persistent foreign body sensation in the eye, or if they are constantly inflamed and irritating. In addition, some pterygia pull on the surface of the cornea and change the refractive properties of the eye, causing astigmatism, or distorted vision.

Pterygia are often asymptomatic, and many do not require immediate treatment. However, if they become red and inflamed or bother people due to persistent foreign body sensations in the eye, surgery will be performed.

No-stitch or autograph pterygium surgery can also be performed under either local or general anaesthetic. The procedure takes about 30 minutes and involves closing the wound left by the removed pterygia with tissue from underneath the eyelid. This is glued in place with a modern tissue adhesive called TISSEEL. After about a week the adhesive dissolves with no residue at all. 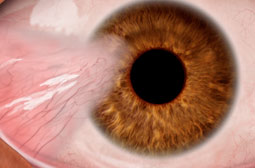